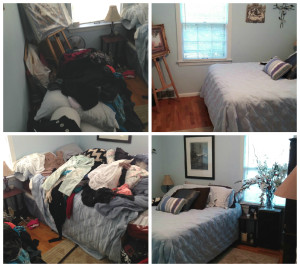 Most people want a guest room in their home but who has a guest 365 days out of the year? That’s a roommate. Shouldn’t that space serve a purpose year round? However, this potentially multi-purpose space often falls victim to trying to “be everything to everyone.” In other words, to serve TOO MANY purposes.

This homeowner decided to convert her basement into a rental unit. Sounds like a good idea but it also meant that EVERYTHING from the walk-out basement had to be moved to the main floor.

The homeowner had the absolute best intentions to mindfully move, purge and rearrange the space. However, this is a project that can easily take more than a single weekend, especially if you’re doing it solo. Unfortunately, this led to many items being put into the guest room to be addressed “later.”

Additionally, the homeowner was prone to using the dining room table as a dumping ground for life (i.e. drop spot). When guests were coming over, it was quicker and easier to sweep all the life build-up on the table into large bins and moving the bins into the guest room.

Finally, the guest room closet and wardrobe space quickly became spillover space for out-of-season clothing. These clothes can fall victim to “out of sight, out of mind.” (Who’s been there before?)

We started this project out by opening (and ultimately) shredding close to a half dozen banker boxes of old bills. To alleviate the incoming, the homeowner spent some homework time enrolling for paperless statements and automatic e-billing, where appropriate. We also purged six cubic feet of “stuff” for the upcoming community yard sale and found proper homes for many out-of-place items.

In fewer than eight hours, we were able to transform this space into a usable guest room. Now, it also allows for access to gift wrap and gift boxes, art supplies and some back-up office supplies. As you can see from the photos, we also included a mock art space with great light for painting to potentially happen. In conclusion, if your guest room needs to serve multiple purposes, don’t attempt to over do it 🙂

Visit Me on These Sites