Check out this great article on hoarding by Linda Melone. Here is the original posting.

You’re buying things a second time because you lost the first ones you purchased. You can’t fit your car in the garage because it’s jam-packed with junk. If this sounds like you, you probably aren’t a hoarder – particularly if all you need is a long weekend and a little help to clear up your clutter. Hoarding is a serious mental illness that affects only 2-5% of the population, according to the American Psychiatric Association. Not all hoarders are to the extremes featured in hoarding reality shows. However, if clutter is affecting your social life, job, family relationships, or personal safety, you may have a problem. Here’s what you need to know. 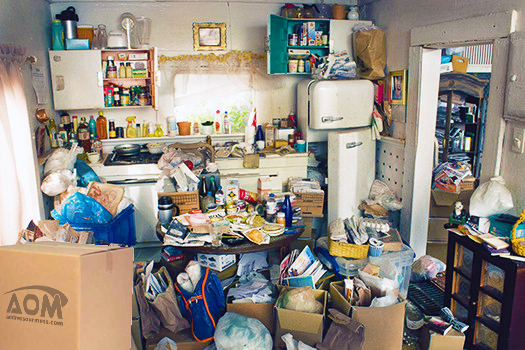 It’s one thing to always have a pile of mail on your kitchen counter or a messy bedroom closet. It’s another thing to store boxes in your oven. “When you cross that line and go from using places that are supposed to be for storage, such as closets, to filling your bathtub and dining room table with boxes, you’re on your way to hoarding,” says Matt Paxton, hoarding specialist.

Hoarders have the best of intensions and the worst follow through, says Patrick McGrath, PhD. “They see a lawn mower on the side of the road and think, ‘Oh, I can fix that,’ forgetting they have 17 in their yard already. They’re always getting ready to do something but never get to it.”

3. Hoarding is often triggered by a major loss.

The death of a loved one, divorce, or other traumatic event—even a date gone horribly wrong—can trigger hoarding. “The hoarded stuff doesn’t die, and it will never leave you,” says McGrath. “So hoarders have connections to their stuff via memories. It’s an emotional connection. Everything has meaning, so by tossing it out you’re disrespecting it and the person connected to it.” This connection often makes it extremely upsetting for the hoarder to throw things out and let them go.

Filling a house with stuff makes for many health hazards. “Fires and mold are problems, and injuries can occur when people trip and fall while making their way through little paths in their home they create,” says McGrath. Often, repairmen cannot access the house for necessary service of plumbing, electric and other utilities.  Hoarding also creates strain in families when, for example, parents will not let their children visit their hoarding grandparents. “People don’t understand the appeal of the hoarded items as the hoarder does,” says McGrath.

Although it usually doesn’t manifest fully until adulthood, hoarding tendencies typically start during adolescence, says Gail Gross, PhD. The average age when symptoms first appear is 13, according to the APA. “There may be a genetic link to hoarding,” says Gross. Hoarding symptoms also tend to run in families, according to a 2015 study published in Depression and Anxiety.

Collectors usually keep their items displayed, organized, and even wrapped and sealed, says McGrath. “Hoarding is willy nilly all over the place. It also interferes with your life.” A large collection of horse memorabilia, for example, that is displayed in a clean, organized way is not hoarding. But if the items start to pile up, become moldy and dirty, and are stashed in the bathtub, that’s hoarding. There’s no organization to the clutter, which is often stacked precariously or tossed into piles.

7. Hoarding is its own mental illness.

Initially thought of as a subset of obsessive-compulsive disorder (OCD), hoarding is now enjoys it’s separate classification. Known as “hoarding disorder,” it affects a person’s ability to maintain relationships, hold down a job, and function normally. Hoarders are often indecisive, prone to procrastination and perfectionism, disorganized, and easily distracted. This can contribute to the overall severity of the hoarding.

If a family member stops inviting you over to their home, they may be embarrassed by the clutter. “They may meet you at the end of the driveway but not allow you to come inside,” says Paxton. “Sometimes you can look toward the top of the windows and see boxes and other items stacked up.”  There may be no place to sit or visit comfortably. In addition, children of hoarders often won’t bring home friends because the mess embarrasses them.

9. Hoarding is not about monetary value.

It’s never about the monetary worth or value of the item itself, says Paxton. “It doesn’t matter what it’s worth, it’s about control. We’ve found everything from famous artwork to $18,000 in cash to piles of used diapers.” On some level, hoarders believe that these items will serve them in the future, says Gross. “They feel less anxious and more comfortable by possessing them. In fact, just the thought of eliminating or clearing the clutter creates anxiety, stress, and dysfunction.”

Aside from a temporarily cleaner home, hiring a crew to clear out a hoarder’s house will do nothing for the person in the long term. In fact, taking things away will only backfire. “Many hoarders experience a subset of problems that tend to get worse over the years, such as alcohol and drug abuse or anxiety,” says Gross.  “Cognitive behavioral therapy is most successful.”  This approach enables hoarders to lower their stress and anxiety and eventually learn to let go of unneeded objects and clutter. “Through therapy, hoarders can give voice to their depression, stress, or anxiety while helping to find healthy ways to reduce their stress, relax, and self manage the hoarding,” says Gross.

If you’re concerned you may be on the path to hoarding, schedule a consultation!

ClutterHoardingOrganizationProfessional Organizer
August 17, 2015in ArticlesComments Off on Hoarding

Visit Me on These Sites